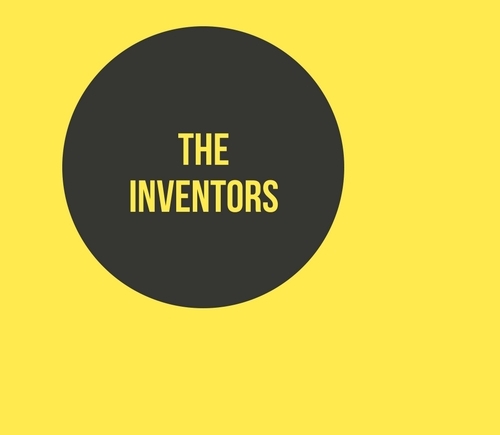 “The Inventors” page is dedicated to all the great scientists who are the major reasons for the biggest of the biggest breakthrough. The intention behind this page is to educate our web site viewers about the lives of those noble scientists. Also, we want to inspire our students and be inspired by understanding the works done by these great scientists.

British chemist Rosalind Elsie Franklin was born into an affluent and influential Jewish family on July 25, 1920, in Notting Hill, London, England. She displayed exceptional intelligence from early childhood, knowing from the age of 15 that she wanted to be a scientist. She received her education at several schools, including North London Collegiate School, where she excelled in science, among other things.

In the fall of 1946, Franklin was appointed at the Laboratoire Central des Services Chimiques de l’Etat in Paris, where she worked with crystallographer Jacques Mering. He taught her X-ray diffraction, which would play an important role in her research that led to the discovery of “the secret of life”—the structure of DNA.

In 1951, Franklin began working as a research associate at the King’s College London in the biophysics unit, where director John Randall used her expertise and X-ray diffraction techniques (mostly of proteins and lipids in solution) on DNA fibres. Studying DNA structure with X-ray diffraction, Franklin and her student Raymond Gosling made an amazing discovery: They took pictures of DNA and discovered that there were two forms of it, a dry “A” form and a wet “B” form. One of their X-ray diffraction pictures of the “B” form of DNA, known as Photograph 51, became famous as critical evidence in identifying the structure of DNA. The photo was acquired through 100 hours of X-ray exposure from a machine Franklin herself had refined.

The two scientists did, in fact, use what they saw in Photo 51 as the basis for their famous model of DNA, which they published on March 7, 1953, and for which they received a Nobel Prize in 1962. Crick and Watson were also able to take most of the credit for the finding: When publishing their model in Nature magazine in April 1953, they included a footnote acknowledging that they were “stimulated by a general knowledge” of Franklin’s and Wilkins’ unpublished contribution, when in fact, much of their work was rooted in Franklin’s photo and findings.

Franklin left King’s College in March 1953 and relocated to Birkbeck College, where she studied the structure of the tobacco mosaic virus and the structure of RNA. Because Randall let Franklin leave on the condition that she would not work on DNA, she turned her attention back to studies of coal. In five years, Franklin published 17 papers on viruses, and her group laid the foundations for structural virology.

Srinivasa Iyengar Ramanujan was an Indian mathematical genius and autodidact who lived during the British Raj. Though he had almost no formal training in pure mathematics, he made substantial contributions to mathematical analysis, number theory, infinite series, and continued fractions, including solutions to mathematical problems considered to be unsolvable. Ramanujan initially developed his own mathematical research in isolation; it was quickly recognized by Indian mathematicians. Seeking mathematicians who could understand his work, in 1913 he began a postal partnership with the English mathematician G. H. Hardy at the University of Cambridge, England. Recognizing the extraordinary work sent to him as samples, Hardy arranged travel for Ramanujan to Cambridge. In his notes, Ramanujan had produced new groundbreaking theorems, including some that Hardy stated had ‘defeated [him and his colleagues] completely’, in addition to rediscovering recently proven – but highly advanced – results.

During his short life, Ramanujan independently compiled nearly 3,900 results (mostly identities and equations). Many were completely novel; his original and highly unconventional results, such as the Ramanujan prime, the Ramanujan theta function, partition formulae, and mock theta functions, have opened entire new areas of work and inspired a vast amount of further research. Nearly all his claims have now been proven correct. The Ramanujan Journal, a peer-reviewed scientific journal, was established to publish work in all areas of mathematics influenced by Ramanujan, and his notebooks – containing summaries of his published and unpublished results – have been analyzed and studied for decades since his death as a source of new mathematical ideas. As late as 2011 and again in 2012, researchers continued to discover that mere comments in his writings about “simple properties” and “similar outputs” for certain findings, were themselves profound and subtle number theory results that remained unsuspected until nearly a century after his death and which relied on work published in 2006. He became one of the youngest Fellows of the Royal Society and only the second Indian member, and the first Indian to be elected a Fellow of Trinity College, Cambridge. Of his original letters, Hardy stated that a ‘single look’ was enough to show they could only have been written by a mathematician of the highest calibre, comparing Ramanujan to other mathematical geniuses such as Euler and Jacobi.

In 1919, ill health – now believed to have been hepatic amoebiasis (a complication from episodes of dysentery many years previously) – compelled Ramanujan’s return to India, where he died in 1920 at the age of 32. His last letters to Hardy, written January 1920, show that he was still continuing to produce new mathematical ideas and theorems. His “lost notebook“, containing discoveries from the last year of his life, caused great excitement among mathematicians when it was rediscovered in 1976.

A deeply religious Hindu, Ramanujan credited his substantial mathematical capacities to divinity, and stated that the mathematical knowledge he displayed was revealed to him by his family goddess. ‘”An equation for me has no meaning,” he once said, “unless it expresses a thought of God.” 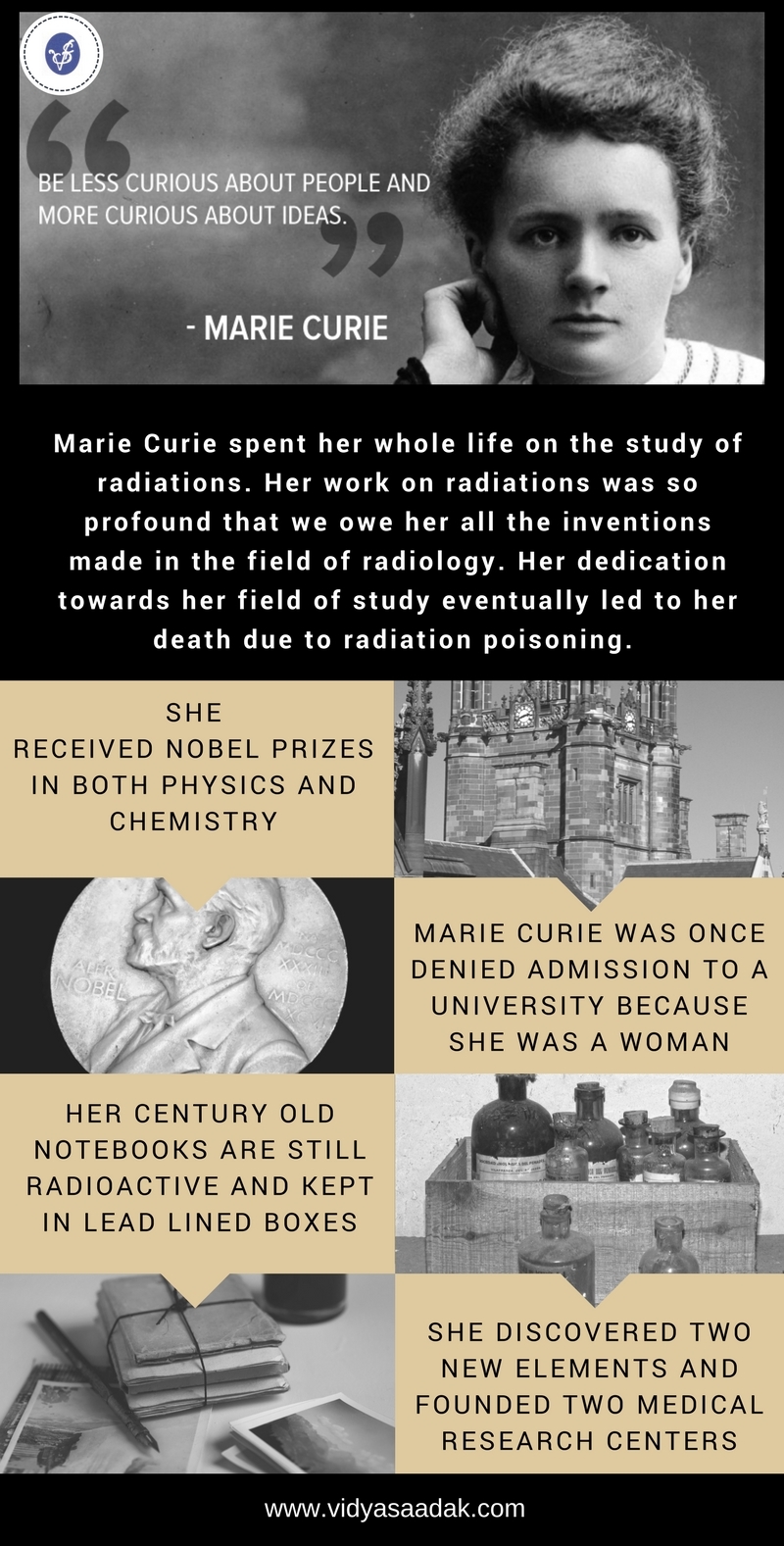 She was also the first woman to become a professor at the University of Paris. She was born in Warsaw and studied at Warsaw’s clandestine Flying University and began her practical scientific training in Warsaw. In 1891, aged 24, she followed her older sister to study in Paris, where she earned her higher degrees and conducted her subsequent scientific work.

She even founded the Curie Institutes in Paris and in Warsaw, which remain major centres of medical research today. During World War I, she developed mobile radiography units to provide X-ray services to field hospitals.

While a French citizen, Marie Curie never lost her sense of Polish identity. She taught her daughters the Polish language and took them on visits to Poland. She named the first chemical element that she discovered‍—‌polonium, which she isolated in 1898‍—‌after her native country.

Nikola Tesla was a Serbian-American inventor, electrical engineer, mechanical engineer, physicist, and futurist who is best known for his contributions to the design of the modern alternating current (AC) electricity supply system.

Born and raised in the Austrian Empire, Tesla received an advanced education in engineering and physics in the 1870s. He emigrated to the United States in 1884, where he would become a naturalised citizen. He worked for a short time at the Edison Machine Works in New York City before he struck out on his own. With the help of partners to finance and market his ideas, Tesla set up laboratories and companies in New York to develop a range of electrical and mechanical devices. His alternating current (AC), induction motor and related polyphase AC patents, licensed by Westinghouse Electric in 1888, earned him a considerable amount of money and became the cornerstone of the polyphase system which that company would eventually market.

Attempting to develop inventions he could patent and market, Tesla conducted a range of experiments with mechanical oscillators/generators, electrical discharge tubes, and early X-ray imaging. He also built a wireless-controlled boat, one of the first ever exhibited. Tesla became well known as an inventor and would demonstrate his achievements to celebrities and wealthy patrons at his lab, and was noted for his showmanship at public lectures.

Throughout the 1890s, Tesla would pursue his ideas for wireless lighting and worldwide wireless electric power distribution in his high-voltage, high-frequency power experiments in New York and Colorado Springs. In 1893, he made pronouncements on the possibility of wireless communication with his devices. Tesla tried to put these ideas to practical use in his unfinished Wardenclyffe Tower project, an intercontinental wireless communication and power transmitter but ran out of funding before he could complete it.

Having spent most of his money, he lived in a series of New York hotels, leaving behind unpaid bills. The nature of his earlier work and the pronouncements he made to the press later in life earned him the reputation of an archetypal “mad scientist”. Tesla died in New York City in January 1943. His work fell into relative obscurity following his death, but in 1960, the General Conference on Weights and Measures named the SI unit of magnetic flux density the Tesla in his honour.